He Came, He Saw, He Fundraised: Trump’s Visit to California

In case you missed it, the president was in the Golden State on Tuesday and Wednesday. His visit, which was really a fundraising trip, coincided with a renewed focus on California’s homeless crisis and a new clash over the state’s environmental policies.

Days before Trump landed in California, White House staff had surveyed the homeless problem on skid row in Downtown L.A. On Tuesday, Trump took that agenda to the Bay Area.

“The people of San Francisco are fed up, and the people of Los Angeles are fed up. And we're looking at it, and we'll be doing something about it," he told reporters aboard Air Force One (CNN).

When asked, Housing Secretary Ben Carson had few answers about what the administration was prepared to do. Trump’s acting chairman of the Council of Economic Advisers, however, referenced “harmful local government policies in select cities, along with ineffective federal government policies of prior administrations” that the president wishes to see reversed. On Wednesday, the president threatened San Francisco with an EPA violation over its homeless policies.

California officials are skeptical of the president’s motives and capacity to assist in the state’s housing crisis. And their attention has now shifted to a new front in the Trump-California war — this time over environmental policies. Trump has announced he will rescind an Obama-era waiver that allowed the state to develop its own vehicle emissions standards.

Of course, none of these issues were cause for Trump’s trip. He was here for the money — about $15 million worth raised at fundraisers hosted by Sun Microsystems co-founder Scott McNealy and developer Geoffrey Palmer.

If that last name sounds familiar, that’s because Palmer is almost as controversial in this state as Trump himself. His downtown L.A. properties have been a flashpoint for protests. One of them, the Medici, was burnt down in a case of arson.

As Trump headed to Palmer’s Beverly Hills home, a clash broke out between protesters and counter-protesters. CBS reports that “multiple groups of people were seen trading blows, grabbing signs and fighting in the streets.”

California may be as blue as they come, but the money will keep Trump coming back, GrassrootsLab’s Mike Madrid told KCRW. 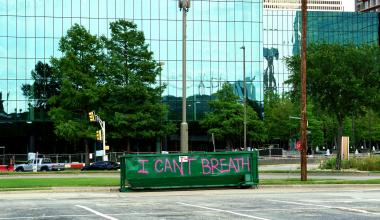